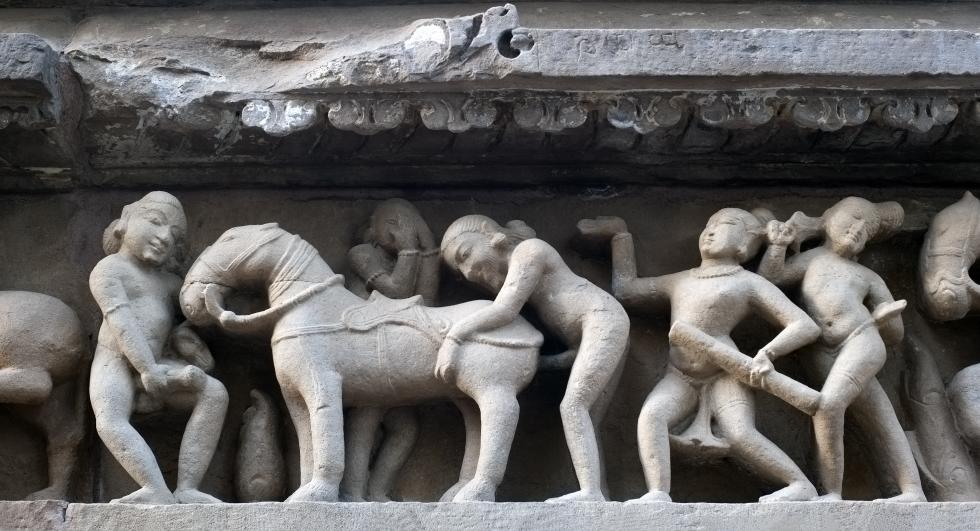 Let’s petition the Supreme Court of Aryavrat and demand the destruction of Khajuraho temples and ban on Kama sutra. We the Hindoo are embarrassed by these embarrassing atrocities. We the Hindoo have these anomalies face palmed on us whenever we try to harp on the asexuality, purity, better redness of our blood and our great culture. These Khajurahos and Kama sutra type things are a Pakistani ISI conspiracy, supported by the traitor musulmans, to malign our pure and awesome culture. They want the world to believe that we are like that only. They want the world to believe we do sex and even enjoy doing it. This is shit. Pure holi gobar.

We the Hindoo are disappointed by our Fascist representatives RSS/BJP (with all their senas and dals). Neither they’ve managed to build a temple nor destroy one. This is ridiculous. When in 1992 they collected bricks to help build the temple we the Hindoo were so hopeful. All they could manage to do was to clear the ground. Dah! It’s been decades and the ground remains unclaimed. Still, we the Hindoo say this, forget about the bricks we donated in 1992, we are sure they must have been stolen or destroyed by the musulmans by now. Let’s destroy Khajuraho temples and use the raw material for our new temple. And no, we are not that stupid only, we the Hindoo understand that temples can’t be built just by bricks alone. Send us our democratically elected fascist leaders and we shall donate iron rods, iron trishools, iron swards, iron sticks etc., for the new temple. And while we are at it, we’ll also give you the names of the people we don’t like, you know for the next pogrom. Wink! Wink!

We also understand the old construction ground it too far from Khajuraho temples, and it would be a burden to carry the raw material there. So we propose we build the new temple in Gujarat (the only remaining land of the brave and free Hindoo). Let’s displace some the aadiwasi population from their lands and build a huge new temple. We the Hindoo demand that this new temple be dedicated to our newly manufactured deity Mr. Vallabhbhai Patel. And while we are at it, let’s beat the Gandhis and Mayavati’s at their game and make it bigger than any of them have ever imagined. Let’s make it the biggest in the world and in his very own strong, macho, Hindoo hridya samrat type image. Yeah! That will restore our pride in our selves.

We the Hindoo digress. We the Hindoo demand the Supreme Court of Aryavrat i.e. the RSS/BJP to destroy these dirty symbols of Pakistani mischief. We the Hindoo implore the Supreme Court of India i.e. the RSS/BJP to ban dirty books like Kama Sutra. We the Hindoos of this unconquered, undivided, best of the best, better than the world, most nice, most advanced, super power, well fed, country be rid of these (remaining) shameful symbols of corruption. And while we are at it, we demand our most greatest country be rid with the minorities (esp. musulmans), gays, lesbians, bisexual, trans-sexuals, intellectuals, M F Hussain, Arundhiti Roy, dalits, adiwasis et. al. Aamin.