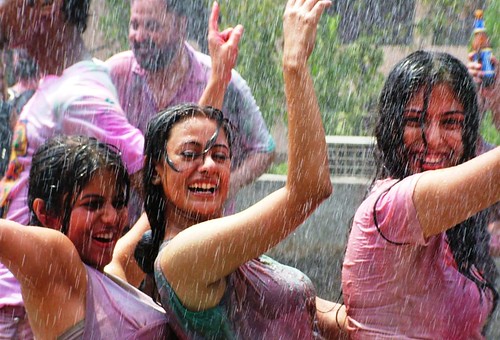 Picture by: bahlsonu (Flickr)We can, and we do, go to any ones house and make a grab at the women,

So the other day it was Holi… a major north Indian Aryan color throwing festival. People get “hi” on local pot and liquor and roam around the streets painting each other blue, black and purple. Pink color is also used. This is perhaps the only time in north India when men and woman get together and express our sexuality, openly, through dance and colors; something like Garba/Dandia.

Picture by: bahlsonu (Flickr)We can, and we do, go to any ones house and make a grab at the women,

Picture by: lighttripper (Flickr)…on local bhang, and no one minds. This day women also feel empowered enough to grab the dude they always had an eye on. Moral: On Holi, go to as many houses as possible, you never know who will pleasantly surprise you! If it were not for Holi a lot of illicit affairs would not have happened. After all, it’s a day of forgiveness and equality, of coming close forgetting past differences etc.

…I used to pray to god to help me get wet with as may girls in the neighborhood as possible. I also prayed for huge wins at the night long Holi gambling. Somehow I never won.

Of course, just like any festival there are many who celebrate Holi for purely moral reasons. Thankfully such being are few and far in between.

Did you know in ancient times during Holi the entire city went on a romp! The king of course had his way but imagine you hooking up with the queen! Those were happy times. Now we don’t do it like that no more and hence the illicit grabbing and groping. For these reasons I have stopped playing Holi. I mean who gives a shit whether Holi is a celebration of good prevailing over evil. I want it the old way… The way our licentious god lord Shri Krishna used to do it! I want my evil and if I ain’t gonna get it that’s it for me.

So this year, as a protest, I just watched pretty ladies getting drenched in color, drinking bhang, gyrating to music enjoying Holi. It was fun. Happy times.

PS: Did I mention, most excellent sweets are made on Holi! I used to stuff myself with them!