Lest we forget Satyendra Dubey 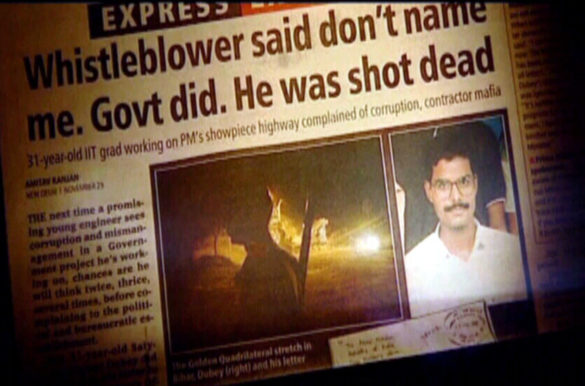 There was a man who wrote to the prime minister of India about the rampant corruption in his department. He begged the PM to keep his identity a secret. He was killed on Nov 27th, 2003. I was partying in NID that very day back then. It has been a decade since whistleblower Satyendra Dubey was killed.

Who was Satyendra Dubey? What did he do?

Why is he important? Because he did what, I probably would not have the courage to do. He stood alone in the fight for justice and did not give in to corruption. He was the project director of National Highways Authority of India for the Golden Quadrilateral highway construction project. He exposed the low quality work done on the golden quadrilateral project and exposed that the funds given to the contractors was far higher than the work that was done. In some cases, he got upto 6 km of road to be relaid because of low quality. He was transferred to another place where he did the same kind of expose. He took exams in office and was promoted to a Project Director’s post. This was enough for him to earn his enemies. He was murdered in Gaya in Bihar.

He fought a lonely battle, when a lesser person would have quit for the sake of his family, he did not quit, he did not move to a metro or a safer city or ‘the west’. He did not do the smart thing. He did not shut up. He was afraid but did not relinquish his conscience. He appealed for secrecy, which was denied to him. He paid with his life, dying alone. Alone as the brave are destined to be. But in his death he showed us the way. We can no longer be distant admirers of bravery of theirs. We have to join in.

Nothing happened. The trigger pullers have been convicted to life for their “botched robbery attempt”, seven years later in 2010. Apparently they had to shoot him as he wouldn’t let go of his suitcase. However, the criminals behind his death never got caught, prosecuted, convicted or jailed. It was just another robbery. Since his death the company he was reporting about (Larson & Tubro) have continued with their mega projects, the officials and contractors he was reporting about are going about life as usual, the prime minister’s office never bothered to apologize, acknowledge or regret the leaking of his identity (which got him shot) and no laws have been made of amended to protect whistleblowers. Nothing has happened.What did happen thought is, many more have lost their lives, got persecuted, bullied, harassed, victimized and what not trying to do the right thing. Shanmughan Manjunath, Amit Jethwa, Shashidhar Mishra, Sahela Masood, Yashwant Sonawane, Lalit Mehta, Narendra Kumar, Rinku Singh Rahi,Satish Shetty, Vijay Pandhare, Avijit Misra, Hemant Goswami, Jeetendra Ghadge, J. N. Jayshree, etc.., etc…

A sham whistleblowers protection bill was introduced in the parliament in 2010. It’s still there.